REVIEW: PRISCILLA QUEEN OF THE DESERT ON BROADWAY

$80, TheaterMania discount. After losing the rush one evening, I really wanted to see this show and needed to stay on schedule for five shows in five days by seeing something that night. So I Googled discounts on my phone and found a solid discount from TheaterMania and showed the page to the person at the box office directly on my phone. He had one orchestra seat left for that night and I took it. It was on the far left aisle of the center orchestra, last row. The sightlines were good, but more happened in the air (far above the stage) than I expected, all of which was cut off by the mezzanine overhang. If I were to see the show again, I'd make an effort to secure an unobstructed view of everything above the stage.

Who
Just me, which ended up working out well when I went to the single ticket option. I did meet a new friend in the rush line, though!

What
I've come to the conclusion that you must approach Priscilla Queen of the Desert as a drag show tricked out for Broadway. Unlike La Cage, which is most definitely a Broadway show with a drag-based plotline, Priscilla is really a drag show that was adapted to its Broadway venue. This may seem to be a small distinction, but it means a lot for the plot, music and general tone of the show. I'll explain.

Priscilla centers on Tick (Mitzi when he's in drag) - played by a completely committed Will Swenson - who is one of the biggest drag queens in Sydney, Australia. Tick receives a call from his wife asking if he'll come visit his son and, to sweeten the deal, she asks him to bring some friends and do a stand of shows at her ailing casino deep in the Australian outback. Tick ropes in the young and feisty Adam (Felicia) and coaxes Bernadette, a somewhat legendary drag performer who is now semi-retired and a full-time woman, to join him. They hop in an old bus they name Priscilla and hit the road.

I have no problem buying this plot at face value, but in the show it felt thin. This was in part because it was abandoned for up to 15 minutes at a time for outsized musical numbers while the jumps from serious plot to musical numbers felt more and more like wild mood swings with little to no transitions. It was also because the consistency was often questionable. I never fully believed that the incredibly sweet and caring Tick could truly never have visited his son before. It felt wildly out of character. A loss in Bernadette's life is rushed through and so covered in jokes that it never quite registered, and the subsequent plot about moving on then lost much of its weight. And when Adam endures an awful experience during the trip, the seriousness doesn't feel adequately addressed because (surprise!) there's another big production to get to. One sidenote of a character, a mail-order bride, apparently thrilled the rest of the audience with her humor but left me shaking my head, wondering why she was there and what I had missed that might make me enjoy her.

The issues presented in Priscilla are far too important to abandon and I think there is a way to address them adequately while still presenting an excellent round of showstopping numbers. However, I don't think this is possible in a show so committed to being a drag show. I hate to say it, but at this level of spectacle you have to choose between the productions and the plot. One has to bow to the other. Priscilla has chosen the spectacle but tried to fit in a fully realized plot anyway, which results in abruptly cutting off the emotional resonance of important moments and not giving all of the characters' experiences and transformations the breathing space they need to feel whole and complete. I left those moments confused, second-guessing my interpretations, and feeling the awkwardness of a stunted resonant moment.

This said, as a larger-than-life drag show (is there really any other kind?), Priscilla succeeds pretty spectacularly. The humor is bawdy and clever - I worried I'd hear tired drag puns repurposed for a Broadway crowd, but the book feels fresh. The music is arranged well, always to maximum effect, sometimes in an unexpected way and sometimes in typical showstopper fashion. I appreciated the fullness of the sound produced by a cast that belts very well across the board. I missed the abundant solos I expected from the show's three stars. Only Nick Adams as Adam/Felicia got the spotlight enough to satisfy my expectations (more on his performance in a moment). As in a true drag show, the stars often lip-synched to the big numbers or saw their voices disappear in the swell of the ensemble. As much as I understand that the lip synch was crucial to the drag show conceit, I wanted to hear individual voices, especially Will Swenson's, much more than I did. The raunchy costuming and choreography, meanwhile, was perfectly suited to a drag show and succeeded unequivocally.

Casting was on point across the board. Will Swenson jumped from Berger in Hair to Tick so successfully and seemingly effortlessly that I am beginning to believe he has unlimited range. Swenson simply is love, giving a generous, engaged, beautiful performance that carried both the plot and the show's emotional core. Also, nice legs. Tony Sheldon as Bernadette was less overtly impressive than I expected but rather turned in an understated performance in which he was simply a lovely woman, inside and out, period. 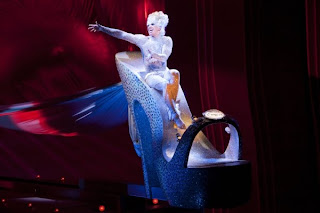 Meanwhile, Nick Adams is giving the performance of his life in all three triple-threat categories. He is the breakout star here, and no one could accuse him of giving anything less than 120% every moment or of letting the energy drop even a fraction on his watch. I was in awe of him in a way I only am when I see something I never in a million years expected could come out of a performer. Now I not only expect his Tony nomination like I expect my daily mail, but I also imagine his many future leading man roles as inevitabilities. Well done, Mr. Adams. I can't end on any other note because what filled my head after the show was all him.

Bottom Line
The excellent performances and spectacle of it all are certainly worthwhile, but the only groundbreaking thing here is an It Gets Better-type message in musical form. The value of that can't be overstated, you just should be aware at the outset that you're seeing a drag show with a throughline and not expect any different.