For the last few years, I've visited New York every October. It is the perfect time of year in the city, with beautiful weather and a rush of fall theater openings. This time around, a friend and I achieved a special feat - seeing five shows in three days (and for a grand total of $150). It was, to say the least, an incredible weekend.

Here's what we saw and what I thought: 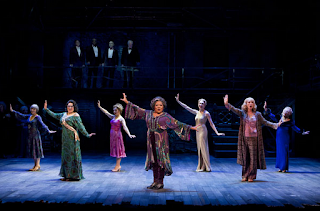 FOLLIES
(Friday evening)
The best: Jan Maxwell, Jane Houdyshell's "Broadway Baby," the mirror dance, staging, costumes, set design, lighting. Showgirls in awe-inspiring costumes haunted the action. A cast of some seriously impressive women filled the stage with an ensemble power rarely glimpsed onstage anymore. The past and present intertwined beautifully both in image and in storytelling. And I'm still thinking about Ms. Maxwell's incredible dramatic performance.
The not-so-good: Not much. I was somewhat conflicted about the show-within-a-show staging in Act Two, but I mostly came around to it.
Rating: 9/10 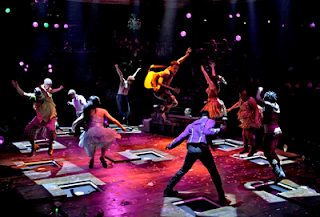 GODSPELL
(Saturday matinee)
The best: The astoundingly tight and talented young cast, Telly Leung's impressions and piano playing, "By My Side," audience interaction. This cast sets the bar for all other young casts on- and off-Broadway, now and in the future. Inventive and modern staging support both plot clarity and the pure fun of the show. The fourth wall is shattered so completely even Hair's interactivity pales in comparison. Challenging content is dealt with thoughtfully and via spirituality rather than religion.
The not-so-good: I never expected to willingly see a reenacted crucifixion; I am still dubious about that choice and experience. At times, the music felt staid and appeared to be holding the show - and especially cast - back.
Rating: 7/10 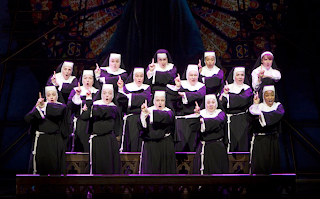 SISTER ACT
(Saturday evening)
The best: Sarah Bolt, dancing nuns, Catholic humor, glitter. Whoever cast Ms. Bolt in Kathy Najimy's original role gets a gold star - she's perfect. The best moments all involve the choir of nuns performing. And the only show with more sparkles is Priscilla, Queen of the Desert, which means Sister Act has ample eye candy.
The not-so-good: Pacing, consistency, leads hitting their high notes. I was not a fan of the changes to the plot from the original movie, and I felt they spent too much time on Deloris' many conflicts and not enough on the nuns getting musical. There were many very flat moments in both certain performances and certain belted notes.
Rating: 5/10 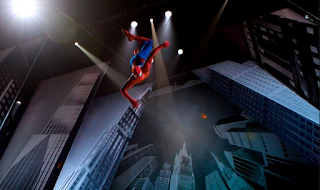 SPIDER-MAN: TURN OFF THE DARK
(Sunday matinee)
The best: Everything aerial, costumes, lead actors. The flying was slow to come, but when it finally appeared, it brought tears to my eyes; it was an incredible effect and spectacle. The villains' costumes were stunning. Reeve Carney, Jennifer Damiano, and Patrick Page make the very most of their roles through terrific performances.
The not-so-good: Everything else. The book and music are mostly muddled and, even more unfortunately, often boring. The female roles are laughably weak in the few places they do exist. The land choreography was glaringly bad, seemingly half-assed in both design and execution.
Rating: 3/10 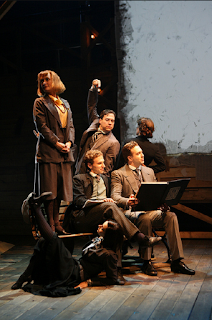 THE BLUE FLOWER
(Sunday evening)
*Off-Broadway at 2econd Stage Theatre
The best: The entire ensemble's performance, all of the music, the new language created within the show. It's really easier to say what didn't work than what did with this piece. I was riveted for the entire show and felt it was mostly perfect. The book is intelligent and intricate, the music delicate and beautiful, the performances so good I forgot they were performances at all. (Special props to Aaron Serotsky, who performed the lead role so brilliantly that I was a bit offended he was the understudy.)
The not-so-good: Change the title (I suggest "Poof Poof Poof Poof") and whittle away the German avant-garde theater bits for length and clarity and the show is absolutely golden.
Rating: 9/10