The answer to the question I posed in my last update ("What's next?") proved to be "A lot."

In the last six months I presented and moderated at the Tessitura Conference, then promptly moved to New York to start work with Disney Theatrical Group. It's a dream come true to work with incredible colleagues and amidst this amazing Broadway community, and I love every second of it.

Being back in New York has been a welcome change of pace and I've been soaking up every artistic experience and new opportunity I can. The best place to keep up on my adventures at the moment is Instagram.

Given all of the changes in my world I've been giving thought to where this blog will go in the future. I'm working on some new things to try out, but in the interim, here are a few items of note from the past six months.

My friends made this and I got to sit in - on my first day back in the city, no less. If you haven't had a chance to be swept away by #BARS Vol. 2 yet, dig in:


It's well-documented how much I love Broadway, and I'll see just about everything, but every once in a while I fall head over heels for a brilliant show. The revival of HAIR ... Hedwig ... but I have never seen a show five (!) times during its run until Falsettos. Thank goodness they filmed this magnificent production; look out for it on PBS this fall. And do yourself a favor by picking up the Broadway Cast Recording (buy from Sh-K-Boom and they'll donate to BC/EFA!). We're lucky to have art like this at a time like this.

Very grateful to have seen @falsettosbway one last time today. #fifthtimesacharm This show is so timely for the moment in which we find our world. It also happened to come at the right time to teach me about choosing a family in my first months back in the city. And as rendered by @lctheater and this incomparable cast, it was truly a perfect musical. If you missed it, check out Live at Lincoln Center on @pbs in a few months. Thank you, #falsettos, for everything. ❤️💛💚💙💜
A video posted by Lauren Rutlin (@1onelauren) on Jan 8, 2017 at 3:34pm PST


Finally, the political situation has been weighing heavily on me as it has on countless others. Please stay informed, stay active, and do what you can with the time and resources you have. Some of my favorite organizations are below, but what matters is finding ways that work for you to show how much you care about our world.

In the past few months that I haven't been on the blog, I've been at work. A few seven-show Saturdays, unveiling a new season, and a promotion to Director of Ticketing later, I'll admit I'm just a tiny bit tired. But I'm mostly asking, "What's next?" 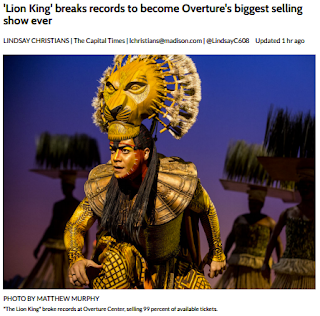 What was next this spring was Disney's The Lion King. Besides getting to work with what is easily one of the best and coolest casts, crews and staffs in the business, we managed to break some records. I've worked quite a few Broadway shows in the last several years but none have caught fire in exactly this way (The Book of Mormon was huge, of course, but we had four times as many seats to sell for The Lion King and the excitement increased exponentially week to week). Our staff never stopped fielding questions about Simba and Mufasa for months, and by the end, I could release a pair of seats, glance away, and when I looked back at the screen they'd be sold. Students waited for hours in rush lines for just a small handful of available tickets. I'm thankful for our incredible team and the audiences here in Madison for supporting this timeless and gorgeous show.

What's next for us at Overture includes mailing subscription tickets for next season to thousands of homes later this month, welcoming the kinkiest show on Broadway, and piling on the summer concerts. What's next for me includes presenting at Tessitura's annual conference (on apps, interactivity and mobile ticketing) and maybe a short vacation at some point. I promise to keep you updated.

My genius friends are making some pretty big waves with the final project from their inaugural rap-meets-musical theater workshop. 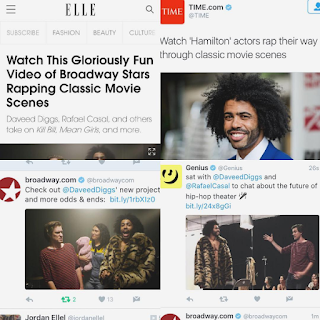 But 32,000 views in two days isn't what's cool. The finished product is actually what's cool. I dare you to only watch it once ...

WHAT SHOULD I SEE?

Since I go to more than my fair share of Broadway shows, I often get asked for recommendations. That's like asking a fashionista to dress you - I am ALWAYS thrilled to help and to talk theater for as long as you want. Theater is a big investment and the sheer number of choices can be overwhelming (see exhibit A at right).

Sometimes people really want to be told exactly what to buy tickets to so that I can take all guesswork out of their planning and commitment. Other times they actually want to know how to narrow the choices and pick something they'll love. Let's break down both kinds of requests.

Besides the super obvious (yes, you should see Hamilton if you can finagle an opportunity), my recommendations are very tailored to the person asking. Unless I already know them extremely well, I always ask a few questions, usually some variation on the following:

1. Which shows have you seen? Which ones did you love? Which did you hate?
What I recommend to the person who can't get enough Mamma Mia is probably going to be very different from what I suggest to a Next to Normal aficionado. I'm not always going to go for the slam dunk but this question is still the most important in figuring out what might become someone's next beloved show.

2. Who's going with you?
For my theater buff fourth grade teacher, Matilda seemed like a home run. Then she told me that her former gym teacher husband wouldn't be able to stomach it. Back to the drawing board. Are you bringing kids? A multi-generational family? Jaded friends? A significant other who has never stepped foot inside a theater? No matter how good the show is, who needs to enjoy it matters more.


3. What do you want to get out of it?
"Um, duh, Lauren, I want to see a great show." Well, sure. But for some, nothing says "I loved it!" like laughing until they cry. For others, a piece that teaches them something or makes them think or feel deeply is what they're after. Some want to see a quintessential or classic (current or future) Broadway show. Others yearn for something that completely subverts the form. Tell me how you want to feel and I'm well on my way to knowing what might meet your needs.

As for how to make your own decision on what to see ... well, let's talk about how I decide. My full trips to New York generally span five to six days and I try to see between six and nine shows in that time (three shows in one day is my record - thank you, Hedwig late show). That seems like a lot, but since I can only take a trip like that once or twice a year, I just can't see everything (someday ...). Here's what gets a show on my list:

Truth time: I'm actually less likely to see a show if it has a Hollywood celebrity in it. I generally assume it was stunt casted and won't be all that high quality. But if one of my favorite Broadway performers is in it, I'll jump in line. I bought Shuffle Along tickets before even reading a synopsis because of Audra McDonald (and Brian Stokes Mitchell and Joshua Henry, but let's be honest, primarily Audra). I've seen every Broadway show Sutton Foster has ever done (except Young Frankenstein, which happened the year I didn't get out to New York and is clearly a blemish on my record). Seeing Danny Burstein onstage always makes me feel like I'm being wrapped in a hug of vulnerability and joy.

I also care about the names on the creative side. If Harvey Fierstein wrote it, I will see it. I'm seeing American Psycho mostly because I believe in Duncan Sheik after Spring Awakening. I've loved enough of Diane Paulus' mind-altering revivals to want a look at anything else she touches. And obviously if Lin-Manuel Miranda is involved I'll be in the front row.

2. Places.
I don't mean that I go back to the venues where I've previously loved shows (though that's a very valid choice if you're a theater architecture buff - I'd sit for hours in the glow of the ghost light at Atlanta's Fox Theater). Rather, which theater companies have produced stuff that you've found compelling? When I find myself consistently loving what I see at a particular organization, I'm much more likely to go back. Some of my most trusted presenters include The Public, Second Stage, and Roundabout.

Maybe the subject matter is out of left field and interesting. Maybe I caught a song or two and need to hear it live (that happened with Waitress). Maybe something grabbed me long ago and I've been wondering about it ever since (Playbill has an awesome tool for that). There are those times when I know nothing about the theater or the cast, the content is completely original (so there's no movie or book to know and love), and yet a kernel about the show crosses my path and completely inspires me. Every Brilliant Thing is a great example and did not disappoint. Trust your gut on these.

What doesn't matter much to me in show selection? Reviews. I rarely read them lest they spoil either the plot of or my hope for a particular show. Occasionally if a show I'm not all that interested in has a lot of buzz, I'll skim a review to see if it changes my mind. Often, positive reviews actually solidify my decision not to buy. Hint: If the joke that the reviewer quotes as one of his favorites doesn't make you laugh or isn't your kind of humor, you can safely pass.

Finally, it's important to remember that you'll definitely see some "meh" shows, and you'll inevitably see a few truly bad shows. Your every pick won't be perfect. Don't worry about it. They become fun stories. Remind me to tell you about Xanadu.
1 comments

NOT THROWING AWAY MY SHOT 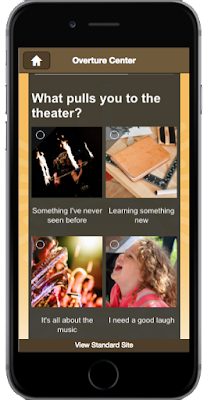 As of today, I'm the Associate Director of Ticketing at Overture. I'm thrilled about the opportunity to work on marketing projects, engage our subscribers, facilitate our work with emerging technologies, and more. And I still get to run the shows!

One of my projects over the past several months has been our mobile app. It's been a lot of fun to exercise my coding muscle a little bit and develop content that is both fast and functional - "I just want to buy tickets!" - as well as fun and interactive. Trivia, quizzes, social media engagement and more are on the menu, as are all kinds of special features for our annual gala Frostiball. To paraphrase Hamilton, the fun is non-stop. I love it.

We have a major onsale for The Lion King at the end of the week and the preparations are reminding me how quickly this business moves and changes. A little over a year ago we put The Book of Mormon on sale and pretty much every single process has been changed or upgraded since then. It's rare to find an industry so steeped in great tradition that makes space for such constant reinvention.

This holiday season I'm super thankful for my bizarre schedule, Overture's plentiful and diverse arts offerings all year round, our awesome team, and everyone who is working to make live entertainment happen.